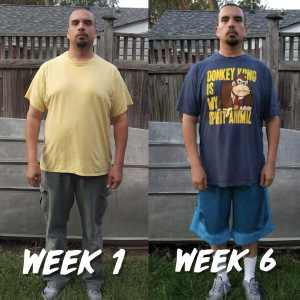 “I tried the whole 30, I wasn’t ready for it. I tried a bunch of word-of-mouth programs that were ridiculously hard to keep on for more than a week or two.”

“This is the best plan I’ve been on, period.”

What was the hardest part?
I think during the second week I was getting really frustrated with getting meals cooked. My cravings didn’t “evolve” yet, so some nights, after just pure frustration of not knowing WTF to eat after a long day at work, I wanted to throw the towel in. That passed pretty quickly though. The easiest part is the overall simplicity of the program. It’s not too restrictive and very easy to follow.

So your 6 weeks finished a little bit back. You’re still going. Tell me about that.
Everything just became a habit so I found myself pushing myself more and more. I’m at the end of the second week of Part 2 going full force. I’m feeling great. Oh, I need smaller pants!

Patrick took part in our Remote 6 Week Coaching program, including individualized nutrition and exercise guidance. His results are a great example of what is possible if you stick to the plan!